Most common side effects caused by tamoxifen are nausea, hot flashes, vaginal dryness, loss of sexual desire. It is notable that tamoxifen is not an antagonist at all tissues like in breast tissue. It therefore has agonist effect in bones and ovaries. In addition, it does not have a cardioprotective effect on heart and causes thromboembolism and fatty liver. It shows a reduction in libido and evidences of decreased cognition have been reported. The side effect of tamoxifen at mitochondrial level lies in an increased reactive oxygen species pathway due to tamoxifen within mitochondria of a cell leading to apoptosis[13]. Whilst it may also prove that the tamoxifen may leads to aging process as it is being used by breast cancer patients for more than 5 years. Less common side effects include anxiety, blistering, peeling, or loosening of the skin and mucous membranes, blurred vision, cataracts in the eyes or other eye problems, change in vaginal discharge, chest pain, chills, confusion, cough, dizziness, fainting, fast heartbeat, fever, hoarseness, lightheadedness, lower back or side pain, pain or feeling of pressure in the pelvis, pain or swelling in the legs, pain, redness, or swelling in your arm or leg, painful or difficult urination, rapid shallow breathing, shortness of breath or trouble with breathing, skin rash or itching over the entire body, sweating, weakness or sleepiness, wheezing, vaginal bleeding and yellow eyes or skin. More common side effects are absent, missed, or irregular periods and decrease in the amount of urine. There seems to be correlation between long-term Tamoxifen administration and endometrial proliferation[14]. Mild-moderate gastrointestinal toxicity (diarrhea, anorexia) and reversible neurotoxicity were observed in dogs receiving chemotherapy plus high-dose Tamoxifen given for seven days[15]. Nausea and vomiting can occur. Dizziness, lethargy, depression, irritability and cerebellar dysfunction have been described.

Tamoxifen is being frequently prescribed as hormonal therapy of estrogen positive breast cancer in the clinics of Pakistan. There is a competitive binding of tamoxifen to estrogen receptors in cancer cells and other tissue targets, and this in turn produces a nuclear complex that decreases DNA synthesis and inhibits estrogen action. It is a non-steroidal agent with potential anti estrogenic abilities which occupies estrogen binding sites in breast tissue and metabolized by the liver enzyme Cyp2D6 (cytochrome P450, family 2, subfamily D, polypeptide 6), rendering active metabolites of Tamoxifen includes N-desmethyl tamoxifen, endoxifen and 4 hydroxy tamoxifen[2]. Tamoxifen is known as a classic pro-drug requiring metabolic activation to start its pharmacological activity. Mainly 2D6 of cytochrome 450 appears to be the rate-limiting enzyme converting the pharmacologically inactive metabolites (Tamoxifen and NDM) to endoxifen, and further contributes to the formation of 4-OH-Tam from Tamoxifen. The findings depict that both genetic and environmental (drug-induced) factors that change CYP2D6 enzyme activity affect Tamoxifen treatment results[2]. Research was done to check the breast density after use of Tamoxifen in patients. MRI of breast was performed after Tamoxifen use. It was concluded that with the use of Tamoxifen breast cancer is reduced hence the breast density came out to be less[3].

Long term use of Tamoxifen as prophylaxis is recommended and found useful with decrease in recurrence rate of breast cancer. The risk-lowering effect of Tamoxifen appears to persist for at least 10 years, yet most side effects of Tamoxifen do not continue after the 5-year treatment period. Thus the long term treatment with Tamoxifen is appreciated[4]. Tamoxifen has been the adjuvant therapy of choice for postmenopausal, node-positive, and estrogen or progesterone receptor positive women since the mid-1980s, and for postmenopausal, node-negative, and estrogen or progesterone receptor-positive women since the early 1990s. It is also being used in many cases of node-negative and receptor-positive premenopausal women. A high proportion (40-60%) of all women who undergo potentially curative surgery for breast cancer now receive adjuvant Tamoxifen therapy for a period of 2 to 5 years. It was first approved for pharmaceutical use in the United Kingdom in 1973 and in the United States in 1977; Tamoxifen is presently registered in 97 countries. Tamoxifen use has been estimated at more than 7 million patient/years. The usual dose in the United States and the United Kingdom is 20 mg/day for 1 to 2 years whereas in continental Europe, usual doses are 30 to 40 mg/day[5].
Tamoxifen is used for the treatment of invasive breast cancer in men and women, the most common type of breast cancer, following surgery and/or radiation and for preventing invasive breast cancer in women at high risk for developing it. Tamoxifen also is used for the treatment of women following surgery and radiation for a less common type of breast cancer called ductal carcinoma in situ (DCIS or Intraductal Carcinoma). Women who have had DCIS are at high risk for developing invasive breast cancer at a later date, and tamoxifen prevents development of the invasive cancer in almost half of the women during the first five years of treatment. Occasionally, tamoxifen is used to stimulate ovulation.

Tamoxifen, sold under the brand name Nolvadex among others, is a medication that is used to prevent breast cancer in women and treat breast cancer in women and men. The introduction of the anti-oestrogen tamoxifen in the early 1970s represented a landmark in the treatment of breast cancer. Over 40 years later, tamoxifen has been shown to be effective not only for early and advanced breast cancer, but also for ductal carcinoma in situ (DCIS) and the chemoprevention of breast cancer in high-risk pre- and post- menopausal women. Indeed, tamoxifen is the benchmark against which newer endocrine therapies continue to be measured.
Breast cancer is the second highly pervasive cause of mortalities in the world[1]. It does not cover only women but also men and food animals. Metastatic breast cancer is more drastic as the main causative agent is not known. Although, multiple causes have been known to be involved in the metastatic breast cancer, but still chemotherapy is a question to absolutely treat this cancer[1]. 1.3 million women suffer from breast cancer in United States. Similarly 1 out of every 7 women had breast cancer. Not only humans but also animals become victim of breast cancer. Tamoxifen was introduced by AstraZeneca of UK for the first time and being frequently prescribed as hormonal therapy for estrogen positive breast cancer in the clinics of Pakistan and Australia. It is far better to use right medicine with right dose at the right stage of the disease to opt maximum curative results. The exact kinetic and dynamic mechanism within human is necessary for manufacturing a drug against any disease.

Figure 1 the chemical structure of Tamoxifen

The excretory fate of Tamoxifen and its metabolites has not been well characterized. Following oral administration of 20 mg dose of radio labeled Tamoxifen in women, normally 65% of the administered dose was excreted in feces for a 2-week time period, mainly as polar conjugates; unchanged tamoxifen and unconjugated metabolites accounted for less than 30% of the fecal radioactivity. Unchanged tamoxifen and N-desmethyl tamoxifen have been detected in urine in small amounts. In animals, Tamoxifen and/or its metabolites appear to undergo extensive enterohepatic circulation and are excreted in feces and urine as glucuronides, other conjugates, and unidentified polar metabolites[6]. In a study involving six healthy male volunteers, Tamoxifen tablets were shown to be as bioavailable as a solution of Tamoxifen citrate. After administration of a single dose of 20 mg, peak serum levels of Tamoxifen were 42 ng/ml; those of the metabolite were 12 ng/ml. The half-lives of the drug and metabolite were approximately 4 and 9 days, respectively, after a single dose. After three widely separated single doses, a reversible increase in elimination half-life occurred[7]. Tamoxifen is extensively metabolised after oral administration. N-desmethyl Tamoxifen, the major metabolite found in patients’ plasma, undergoes secondary metabolism to 4-hydroxy-N-desmethyl Tamoxifen (endoxifen). The enzyme involved in this conversion is cytochrome P450 2D6 (CYP2D6), which also converts Tamoxifen to 4-hydroxy Tamoxifen. This metabolite undergoes secondary metabolism to endoxifen. It is widely accepted that the majority of the anti-proliferative effect of Tamoxifen occurs via its active metabolites. 4-hydroxy Tamoxifen has at least 100-fold greater affinity for the ER than Tamoxifen, and has a similarly increased potency in anti-proliferative action. Endoxifen has an equivalent anti-proliferative potency and ER binding ability to 4-hydroxy Tamoxifen but is present in higher concentrations in the plasma. Any factor that diminishes production of these metabolites could impact on Tamoxifen efficacy. Several enzymes are involved in these metabolic pathways, with CYP2D6 playing a pivotal role. CYP2D6 is a polymorphic gene with over 90 documented alleles[8].
Peak concentrations occur 4-7 h after oral dosing. Peak concentrations after single oral doses of 20mg are about 40μg/l. There is no information on absolute bioavailability[10-12]. The elimination is biphasic, with an initial half-life of around 7 h and a terminal half-life of 7-11 days[8-10]. Tamoxifen is more than 99% protein-bound in serum, predominantly to albumin. In patients with breast cancer, concentrations of Tamoxifen and its metabolites in pleural, pericardial and peritoneal effusion fluid are between 20 and 100% of those in serum, but only trace amounts enter the cerebrospinal fluid. Concentrations in breast cancer tissue exceed those in serum. The volume of distribution is 50-60 l/kg[11,12].

An antiestrogen with potent anti-cancer and PKC inhibitory activities 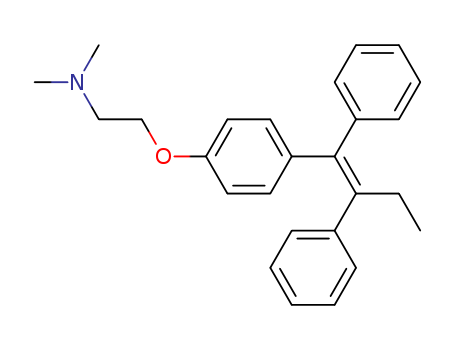 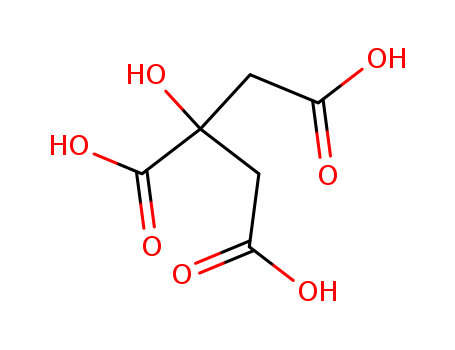 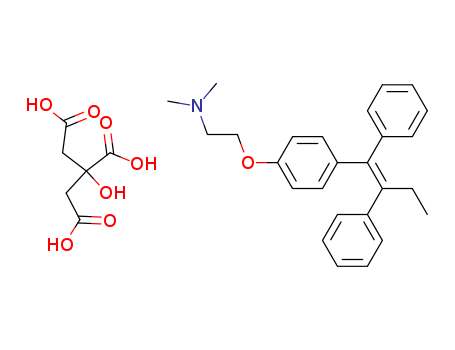 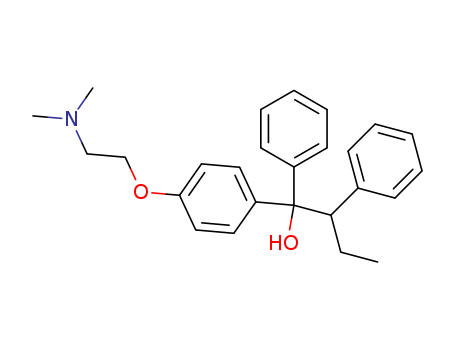 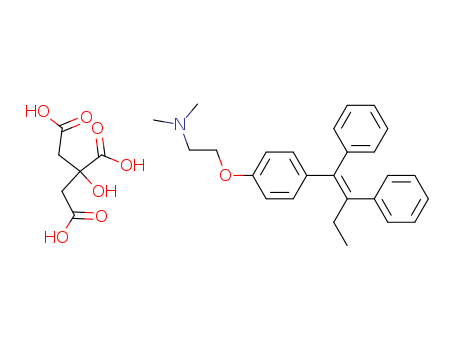